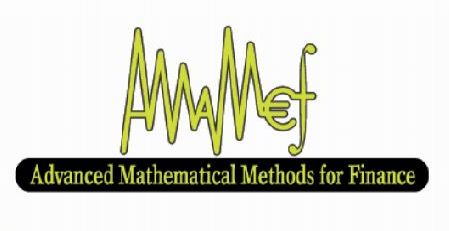 AMaMeF is a network of researchers based in Europe active in the field of mathematical finance.

Methods from probability, stochastic analysis, deterministic and stochastic control theory, the theory of differential equations, functional analysis, mathematical statistics, numerical analysis and simulation, play a crucial role in the study of financial instruments and the very complex markets in which these instruments are traded. In particular, the problems associated with the pricing and hedging of derivatives, the implementation of large scale portfolio optimization methodologies, and the modeling of the dynamics of interest rates have inspired the development of sophisticated analytical tools and new mathematical methods of great importance for problems in financial economics.

AMaMeF embraces all the areas of the financial modeling related to financial markets and also energy and commodity markets. Moreover, the related quantification and management of relevant risks are studied. In this direction also all relations between insurance and finance are kept at focus.
AMaMeF keeps innovation as central and provides platforms of exchange of knowledge and discussions at the frontiers of research.

AMaMeF was born as a programme network of the European Science Foundation in 2005. See link. This framework lasted for 5 years during which AMaMeF was grown becoming a real network of reference in Europe. Its regular events constituted regular platforms for the exchange of knowledge via both large general conferences and smaller targeted events.

Since 2010 AMaMeF exists as a network of researchers promoting the exchange of knowledge.
A biannual conference is organized as major event and fosters smaller workshops. In the spirit of AMaMeF facilitates the interaction between young and experienced researchers to promote the growth of the education in the subjects of interest.